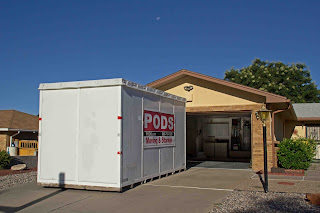 On Saturday, July 23, the PODS was delivered to my new residence.  It was on the driveway early enough that I was able to head over to the High Desert ARC Social Breakfast.

not in a big hurry to start unloading the POD.   Breakfast was at Mimi's near Jefferson, not the normal monthly breakfast.  Its a good place to avoid.  Breakfast about $16 including tip.  We were asking/looking for coffee refills.

After breakfast, I did a couple other errands, returning home about noon.   My that time, it was a little too hot to start moving stuff into the house.  Thermometers hit 101 that day in Rio Rancho.

Once the evening was cooling off, I started moving stuff from the PODS into the garage and house.  Took a break for sleep and back to moving out of the 'pods until the temperature was too high.  Closed the garage door and worked in the house, moving goods from garage into closets and cabinets in the house. 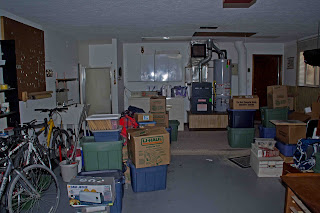 Sunday evening was the same thing.  Moved what I could grab by myself out of the PODS and into the garage.  Was back at it Monday morning when cousin Don came to help me.

We were able to get everything moved out of the PODS and at least into the garage.  It was time for food and a well earned pints of micro-brew at "The Local Brewhouse".  Thanks to cousin Don for all of his help (and push) to get the move accomplished.

Now, I have been slowly moving my possessions from the garage into the house.  The dish and clothes washers have been busy.  The PODS was removed from my drive - they were happy to get it back.  It was swepts out, loaded onto the truck and taken directly to the next customer's property.
Posted by NaugaBike at 4:50 PM No comments:

Loaded up and Gone 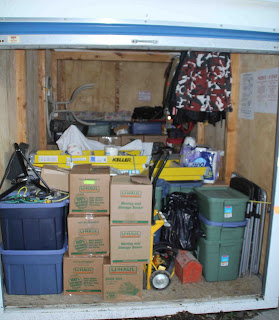 After breakfast Saturday morning, Don and I tackled loading the rest of my stuff into the POD,  We gave ourselves the goal of being pack and on the road Thursday morning.  As I would pack a box, Don was loading in into the POD.  We was also looking at other things I may want to load and thigs he might like to take off my hands.

We put in some long days and were exhausted after dinner time.  We took time off for making the usual Sunday and Tuesday coffees at Panera Bread.  Thursday early morning, we were packed up and the POD was locked.

Said my "good-bye" to my house for the last 30 years.  Was an emotional "farewell".  Off to Panera for coffee.  Spent about 1 1/2 hour there visiting and saying "good-bye". 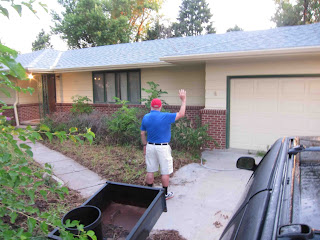 Then, it was on the road heading southwest.  We decided to take it easy on the way back, spending the night in Dodge City.

Made Dodge City in planty time to tour the old Boot Hill museum.  Had a pint of beer at the Long Branch Saloon.  Checked into the hotel.  Walked across Wyatt Earp Blvd to Bad Habits for brew and burger.  All the times I had been in this bar, never seen it so busy.

We were exhausted and crashed into bed.  On the road about 6:30 in the morning.  Drove to Liberal where we had breakfast.  When we got Don's place in Albuquerque, my nerves let loose - my stomach rebelled from the nerves.  Got my car out of Don's lot and drove to my Rio Rancho house.Saturday morning, Don came up and we unloaded his van.
Posted by NaugaBike at 4:37 PM No comments: 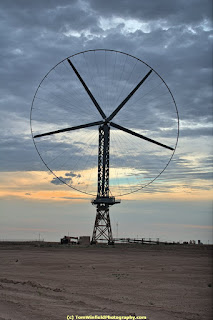 Dodge City, KS became the regular overnight stop for me.  The desk clerk at the hotel knew me when I drove up.  I was looking forward to the burger and brew across the the street from the hotel.  For your information - my favorite hotel was the Rodeway Inn and food was at Bad Habits Sports Bar & Grill.

For a little variety, I would drive either US 56 or US 54 out of Dodge City area to I-25 or I-40.  I still have not found out what this structure (pictured here) is in Hooker, OK.

In Albuquerque, I picked up a desk and file cabinet from Office Max.  Started assembling the file cabinet.

I was invited to a 4th of July cook-out.  Hosts were the owners of the house I rented in January and friends of cousin Don.  Was and enjoyable evening.  We were treated to a personal/family fireworks show.

Cousin Don offered to come to Iowa with me to help me finish packing the POD for the move.  We made plans to head to Iowa, driving through - 900 miles in one day.  Made it for Saturday breakfast.
Posted by NaugaBike at 3:15 PM No comments: 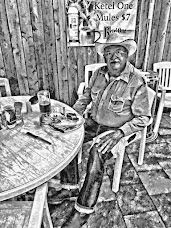